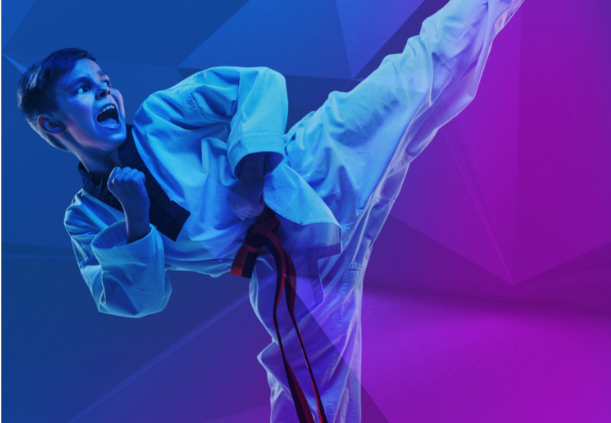 Secret #2 They’re going to learn focus and stillness. So, as they go throughout their training, they’re going to keep hearing us always say commands like, “Lock it up,” which means they stand still and they show Focus. Focus your Eyes, Mind, and Body….that’s something that I repeat all the time in the classes. So the longer they train, their focus is going to improve as well.

Secret #5 They’re going to learn to connect their Mind, Body, and Spirit. So, what that means is, unlike organized sports, martial arts, because it’s by yourself, when you’re doing things you’re learning about yourself, you’re learning about your body. So, when I punch I can feel how that feels, I know how far I have to be. So, the more I train, I get used to how my body moves and reacts. Even reflexes, because of martial arts training my reflexes are fast, and so sometimes when I’m walking and if a little leaf in fall time falls down, I’ll move right away because I’m reacting faster than the average person. They’re also going to learn to overcome fear faster. So, when something happens where they got to make a decision, they’re not going to just sit there and freeze, they’re not going to be paralyzed. They’re going to right away make a quick decision, and they’re going to go either option A, option B. Secret

And the last secret (#7) is, they’re going to learn to breathe properly. So, breathing obviously everybody knows, we do this all the time. But martial arts we actually have a way we breathe, and when we breathe, and that’s controls us. Because breathing controls everything, when you’re angry, when you’re scared, your breathing pattern changes. Because in martial arts that is everything we do is breathing, we’re going to be able to control our temperature. So, if we’re tired or we’re not feeling good or if we’re really angry, we can control our scenarios and before we think, before we do, we can think first and then we react, because of the breathing we’ve been learning.

Want to join the discussion?
Feel free to contribute!

We’re happy to answer any questions.

© Richmond Martial Arts 2020
Made with ♥ by Strategy Lab

How to Bully Proof your Child

Benefits For Kids Training In Martial Arts Scroll to top